How to Find the Starting Note in a Song: Part 2

This questions might seem trivial at first for some singers. 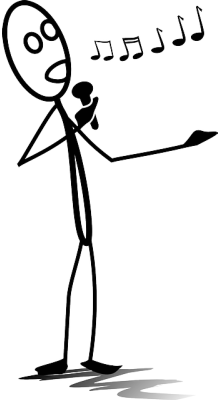 However, it does apply to all skill levels. Consider a “Classical” aria where the piano, or orchestra, plays an introduction that goes on for what seems like minutes and the vocalist seems to pick the starting note out of thin air as it doesn’t apparently fit with anything recent in the accompaniment (think Brahms). In such situations the singer might be listening for a strong note 8 or 16 measures earlier and from that point jumping a known interval to find the right entrance. Wow! It’s not easy sometimes!

Fortunately, most every day songs are relative simple, but there are many levels. And, depending on your background and training, you might have good relative pitch for example, but not be as good with matching single note pitches.

So, here’s an overview of where we’re going. We’ll take a few more steps today, then revisit more depth in following segments.

Let’s go back to our example where you are leading a song in a group. This might be a campfire sing-a-long, a church choir setting, leading a congregational song, at a kids camp, or one of many other settings.

Often it’s easiest to teach a song with little accompaniment. The problem is that if a guitar or piano are playing along strongly, they can obscure the notes you’re singing for some listening. In this case, you are being mindful of those others who have difficulty picking out and matching pitches (we all have this challenge to some degree).

The most common approaches:
1. Chord – ask an accompaniment musician for the chord
2. Single note – ask a single note
3. Chord progression (tip: playing the end of a song)

In most cases asking the accompanist (maybe yourself) to play an opening chord will be all you need. The starting chord severs several important functions:
1. It establishes the key for the song (more about songs that change keys later-that’s less common)
2. Your starting note is usually the root of the chord

For most popular songs that you lead to a group, the starting note is often the root of the chord, or is easy to pick from the basic chord triad.

Of course this is not always the case and you may need to ask for a single note. Even when doing this, playing the chord first can be helpful to establish the key, as a single note by itself could leave you ‘hanging’ with where to go (eg, getting the sense of the relative notes in the key).

In our next segment, we’ll talk more about what’s in the chord (1, 3, 5), chord voicings that might throw you off, and how to most effectively incorporate a “single note” prompt for your starting pitch.

For some reading this, it’s pushing a fast learning curve, and for others this might be mostly ‘old hat’ but hopefully you’re starting to get the idea that there can be snags at times and one formula won’t cover all cases. Hopefully there’s a nugget of value for all and we will dive much deeper in the next days.

Until the next segment… ask questions below!

To Your Highest Singing Results!

This site uses Akismet to reduce spam. Learn how your comment data is processed.

How I select first note?

Hi Avanash, Sorry, I don’t understand your question. Did you read the article?